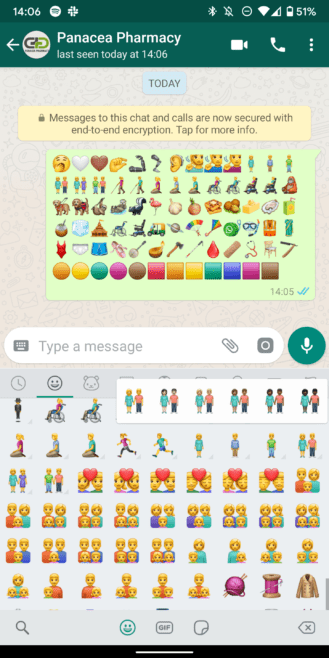 WhatsApp regularly rolls out amazing updates which are very helpful and innovative.  Emojis are one of the best way to describe expressions over text. Updating emojis is one of the best updates an app can attract people, Unicode’s new release has been rolled out and now WhatsApp Beta has also updated its emoji content.

The Unicode 12.0 was announced officially many months ago, but the emojis and changes it brought have slowly flowing down to different platforms. Google already applied them in Android 10, but WhatsApp, which likes to use its own cross-platforms, is just now following suit.

The messenger v2.19.315, which is in beta now, brings all of Unicode 12’s new emojis, which include a yawning face, a pinching hand, kneeling people, several addition for hearing and mobility-impaired people, guide and service dogs, an orangutan, garlic, waffles, onion, a flamingo, falafel, a Hindu temple, multiple clothing additions, a parachute and a kite, a WhatsApp-branded yo-yo, a drop of blood, an axe, and several new colours for hearts, circles, and squares. The existing three people holding hand emoji get different skin colour variations too to denote multi-racial couples. You can see all the additions in the Unicode’s official list. screenshots provided below. 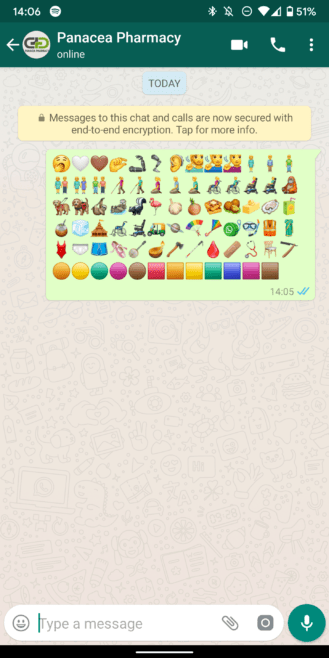 Overall, there are 74 brand-new emojis, but hundreds if you consider the various skin colour options. To get these emojis, you need to be on WhatsApp beta v2.19.315, which is available on the Play Store (if you join the beta).

Also, last week, WhatsApp beta for iOS was spotted testing a new feature that allowed streaming Netflix trailers directly in the app. When the feature rolls out, sharing a trailer of a show or movie on Netflix to an iOS user on WhatsApp will show a large thumbnail with a ‘play’ icon, that will play the video in a picture-in-picture format, within the app. The user will not actually have to head to the Netflix app to watch the video. Like how YouTube videos play on WhatsApp currently.

Did Charli D’Amelio buy TikTok followers to hit the 100 million...