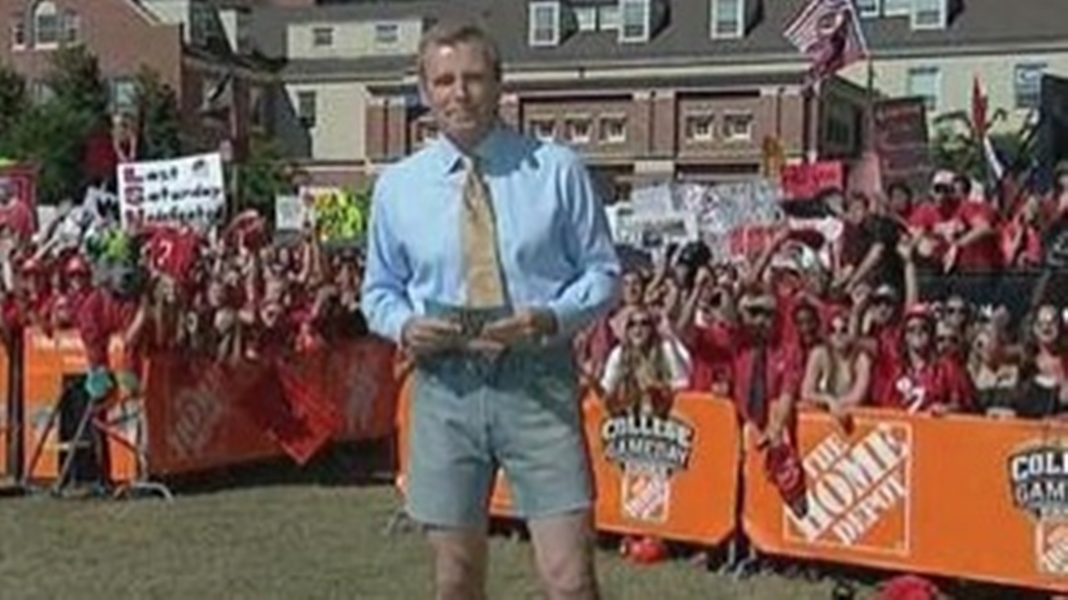 Tom Rinaldi is a reporter for Fox Sports and has previously covered the Wimbledon and the US Open for ESPN. As a reporter for ESPN, Rinaldi has covered for ‘SportsCenter’, ‘Outside the Lines’, ‘College GameDay’ and ‘Sunday NFL Countdown’.

Rinaldi, who is leaving for Fox Sports, was given a proper send-off by ESPN. While working on his final ‘College GameDay’ on 1st January 2021, the crew acknowledged Rinaldi’s contributions to ESPN. The host, Rece Davis said, “You’ve been a confidant, the conscience of this show”.

Tom Rinaldi Has A Net Worth Of $1.5 Million

According to CelebrityNetWorth, Rinaldi has a net worth of $1.5 million, generated from his career as an American journalist and reporter.

Before his career in journalism, Rinaldi was a high school English teacher and a handball coach at the Morris High School in New York. He worked as a reporter for the KATU-TV in Oregon from 1996 to 1998 and then for CNN/SI from 1998 to 2002. He later joined ESPN in 2003. In 2020, USA Today reported that Rinaldi would be leaving ESPN and has signed with Fox Sports, where he is said to cover major sporting events.

Also Read  MacKenzie Scott: Net Worth of Jeff Bezos ex-wife as she donates $4 Billion to charities

Since 2006, Rinaldi was also the lead interviewer and feature reporter for ESPN’s and ABC’s golf coverage. In his capacity, he had been praised by many for his essays, and his awards are a testimony of his success.

ESPN Sends Off Tom Rinaldi As He Leaves For Fox News

‘College GameDay’ paid tribute to Rinaldi before his final show, giving him a heartfelt send-off on 1st January 2020. Rinaldi, who is leaving ESPN for Fox Sports in January, used this moment to thank the crew, show producers and staff, “It’s been an incredible ride. Nineteen years at ESPN and 17 years as part of College GameDay. And the indulgence of really being able to say thank you”.

‘College GameDay’ host, Rece Davis and analysts, Desmond Howard and David Pollack also wished Rinaldi well as they gave him a standing ovation. Davis said, “You have been a confidant, the conscious of this show. You have welcomed me with open arms and as I have told you when you told us the news that you are moving on to the next great opportunity, (we are) friends first no matter what and I appreciate everything you have meant to this show and to me personally”.

ESPN aired a segment written by Rinaldi and shared moments throughout his career with the network. “For more than 15 years, I never had to graduate, from the greatest gig and the grandest show and from being a part of this family. It’s bond and love and example of dedication and leadership, warmth and cheer, trust and teamwork, kindness and caring. So, I thank you for sharing the stories and the moments and all the Saturday mornings, with the deepest gratitude, Tom,” Rinaldi said.

While talking about him joining Fox Sports, Rinaldi said in a statement, “I’m beyond excited to join the great team at Fox Sports. To contribute to the network’s incredible collection of live events, and to continue to tell the stories across those sports and in those venues, is such a fantastic opportunity. I can’t wait to get started”.

James Corden Net Worth: Backlash for playing Gay in ‘The Prom’

Tommy Tuberville Net Worth: Alabama’s ‘maybe’ Senator, is Half a Billion...