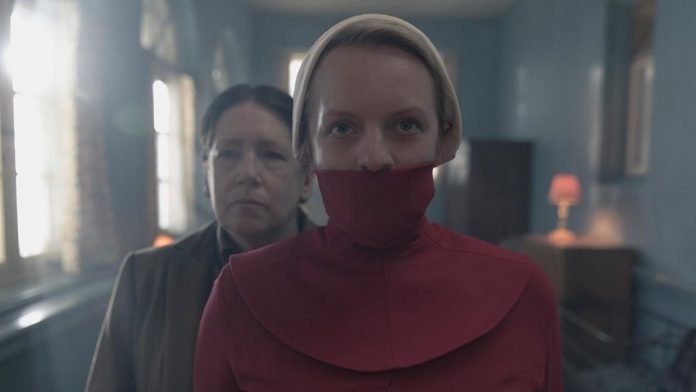 Adaptation of book, into a sensational, funny, gut-wrenching Dystopian series. The Handmaid’s Tale feels like flipping through a book. It beautifully crafted from Margaret Atwood’s novel into this Hulu award-winning series. It redefines patriarchy and the roles of a woman and their fight to gain individuality. It is Bruce Miller’s production.

In a brief period, it has collected a lot of applauds from all over the world making the show won an Emmy for Outstanding Series and hitting the top charts. It is an eye-opener and a must-watch. Ever since we can’t hold up for The Handmaid’s Tale season 4.

The storyline of The handmaid’s tale displays uncomfortable Christian theories and their followers. Apparently, there is a ’fertility crisis’ in the USA, and is taken care of by these followers, which means ”that among every 5 newborns, only 1 child survives.” Furthermore, Serena (the commander’s wife) and other commanders from the community figures out how to decipher this crisis.

The solution is to acquire the most fertile woman in the country and whirl them into their Handmaids. We see Elizabeth Moss playing a lead, powerful role of June Osborn. She is against this totalitarianism and decides to free 52 hostages. Does she succeed or not? We will leave it up to you to see, not cascading any more spoilers.

The Fortunes of Season 4

The Fans were in a sigh of relief when the official Twitter channel of The Handmaid’s Tale confirmed the appearance of Season 4. Further, they also released a trailer. The production team though planned to release it by September 2020 but because of the ongoing pandemic of COVID-19, the show has vouched for a slight delay just like other prominent shows.

After fulfilling the climax of season3, viewers have risen their expectations for the next season. We can’t wait to discover what’s more to this bag of remarkable writing and cast.

There are a lot of queries and predictions attached to season 4. Just after the last episode of season 3, fans can’t stop themselves to draw out theories, some of them make sense, some hardly do.

As Commander Lawrence knew about June’s escape plan, he might turn out to be a central focus in the upcoming season as June’s fate lies in his hands. He may kill her as well. But this ain’t Game of Thrones, where every lead role dies and June is not someone who gets easily defeated so there’s a possibility of June sent to the colonies.

Another speculation is that she hides from Lawrence to protect herself and Martha and other Handmaids help her to do so.

All we can do is to count down the days until Hulu airs the season by the end of 2020 and plant a little ’Handmaid’s Tale’ inside our heads.

‘Rick and Morty’ Season 5 Might Drop Sooner Than Expected- According...

‘Rick And Morty’ Season 4 set to start Streaming on Hulu...

Tekashi 6ix9ine’s net worth and his most anticipated documentary