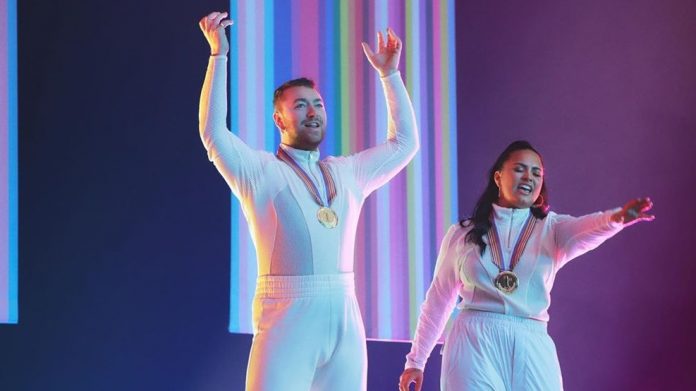 Demi Lovato has entered 2020 with a new spirit after her fatal overdose in 2018. She collaborated with Sam Smith to make the song ‘I’m Ready’ which was released on 16th April 2020.

The songs talk about how they are ready to be loved by someone. The chorus of the songs reiterates this –

It also describes what they’re looking for in their ideal partner. He should be loyal, a believer, an achiever, a redeemer, a winner. They’re ready to be loved by someone who has all the above qualities.

The music video of the song is Olympic-themed with wrestling, swimming, gymnastics, and podiums. The singers are gracing the number 1 podium gracing gold medals at the end of the video and they don’t deserve any less.

The song will be a part of Sam Smith’s upcoming album which was initially titled, ‘To Die For’.

As of now, it’s release is postponed and the title is set to change but one thing we know for sure is that ‘I’m Ready’ will be a part of the new album.

Sam Smith was absolutely positive about his and Demi Lovato’s collaboration. According to ET Canada, he adores her and hopes that this isn’t the last time they sing together –

“I never doubted that it would work, I think mainly because I’m a student of Demi’s voice probably”.

The singer shared that he’s been training for this moment his entire life – “Growing up listening to her music and singing her music and trying to sing like Demi Lovato, I’ve been training for this moment for a long time. I absolutely adore her. As well as her incredible talent, everything she stands for as a human being is what I believe in and I just adore her. So, I’m so happy it’s worked and I hope this isn’t the last time we sing together.”

He also revealed that Demi Lovato is the strongest person he knows and her journey of dealing with mental health issues and her composure through al of it is inspiring to him as he has also struggled with such issues.

“I just had empathy for her at the moment”, says Ryan...