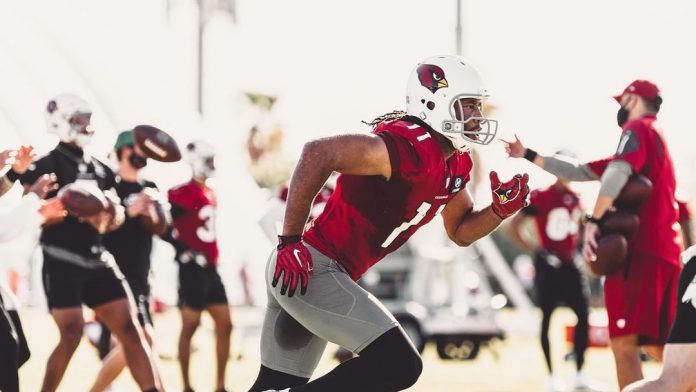 In a time where professional sports, have become so fast-moving and competitive that words like ‘team loyalty’ are becoming rare. Players end up playing for the highest bidder and teams sell off their players for more money.

Larry Fitzgerald, the Arizona Cardinals wide receiver, belongs to a now rare species of players. The 37-year-old National Football League (NFL) player has been loyal to his team, ever since he was drafted by the Cardinals back in 2004.

Fitzgerald has since established himself as one of the all-time greats in the game. The NFL player has broken a number of records and won praises from fans and peers.

Seattle Seahawks have been long time NFC West rivals of the Cardinals. However, during their game this Thursday, the Seahawks defeated the Cardinals with a score of 28-21. Though Fitzgerald played with all his heart and put up some good figures, he could not carry the Cardinals to a victory.

Larry Fitzgerald Net Worth is around $50 Million

According to CelebrityNetworth, through his 16-year long career as a wider receiver for the Cardinals, Larry Fitzgerald has an estimated net worth of $50 Million.

For his contract renewal with the Cardinals in 2011, Fitzgerald was paid a handsome amount of $120 Million for an 8-year contract with the team. This made him 5th highest-paid player in the NFL.

According to Forbes, Fitzgerald’s annual income is somewhat near $17 Million. He also makes another $1.5 Million through brand endorsements. He also owns a 9,321-square-foot mansion that sits on 1.92 acres of land and is valued at around $5 Million.

Fitzgerald is widely considered as one of the best wide receivers of all time. Though he is 37, he still dominates the field like a 25-year-old. He holds the record for the second highest number of receptions with over 1400 career receptions to his name.

A Brilliant Effort against the Seahawks goes in vain

Seahawks have been the arch rivals of the Cardinals for a long time now. A game between the two NFC West time is always a treat for the eyes.

When the two teams previously faced off each other in October, Fitzgerald really stood out in the game as the Cardinal’s 37-34 victory over Seahawks was accompanied by Fitzgerald making a record of the highest career receptions at State Farm Stadium with a total of 647 career catches.

But when the Cardinals faced Seahawks again this Thursday, the Seahawks fought back and won the game by 28-21. Despite a brilliant effort from Fitzgerald who brought in eight of 10 targets for 62 yards, the Cardinals failed to grab another victory.

Van Jones Net Worth And Salary: CNN’s Political Commentator is Worth...

What was NFL Star Kevin Greene’s Net Worth at the time...

Tulsi Gabbar Net Worth and Why She Introduced a Bill Against...