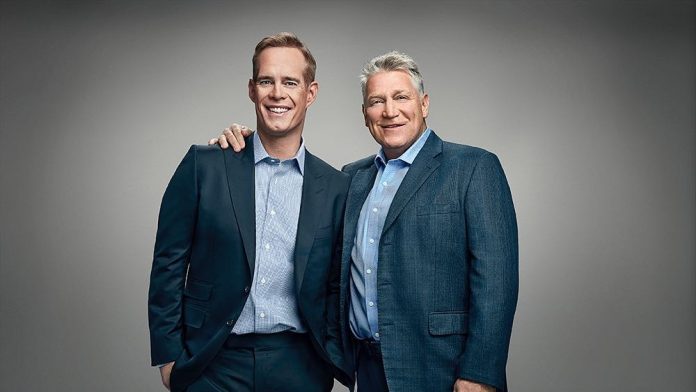 The profession of sports casting is a world in its own. It is never easy to sit down for hours and give play-by-play commentary. On top of that, there is the ever looming pressure of not letting your personal emotions get the better of you and restrain from any bias or favours.

“The worst thing in the world is to feel like people turn on the TV and say, oh god, it’s that guy again. I’m trying to avoid that.”

Though the statement by FOX sportscaster Joe Buck is very much true, he himself has been on the wrong end of it for a long time now. The 51-year-old announcer inherited the will of sports casting from his father who was also a broadcaster.

Buck has been serving as the play-by-play announcer for the World Series since 1996, with 1997 and 1999 being the exceptions. But during his decade long career, Buck has time and again been in controversy due to his statement during the game.

Joe Buck Net Worth is around $15 Million

According to celebritynetworth.com, Joe Buck, a household name at Fox Sports has amassed a net worth of about $15 Million.

As a broadcaster for NFL, Buck makes roughly $300K for a single game. This when added with income from baseball games and various other sports that he calls, Joe Buck’s annual salary is somewhere around $6 Million.

Joe Buck, son of the legendary sports announcer Jack Buck, has acquired his wealth through his profession a sports announcer for National Football League and Major League Baseball. Buck has won several sports Emmy awards for his work as a broadcaster.

Though Buck has worked with KNOX, KMOV and the ESPN radio, he is known as the face of Fox Sports. When the network kick started Buck’s career back in 1994, it made him the youngest broadcaster to announce the National Football League (NFL).

Buck has made quite a name for himself and is the lead Fox Sports broadcaster since 2002. According to sportscasting.com, during his 20 yearlong sports announcing career, Buck has been the announcer for 21 World Series, of which the last 19 were in a row.

Always finding himself in controversies

Joe Buck has always been a polarizing figure in the world of sports casting. Over the years Buck has sometimes been criticized by fans who tend to think that he “hates” their favourite team, and sometimes Joe Buck has been criticized for getting extra attention by the broadcast and sports fraternity as some believe that he is nothing but another product of nepotism.

Buck on the other hand argues that the hate sports fans have for him is because they are used hearing local announcers and not those working national broadcasts. He said,

“Fans are used to hearing their hometown guys. When you come at it objectively, people aren’t used to it.”

Joe Buck was born on the 25th of April in the year 1969 in St. Petersburg, Florida, U.S. Brought up in the S.T Louise area, Buck attended St. Louis Country Day School and in 1989 he began his broadcasting career while being an undergraduate at Indiana University Bloomington.

Buck was married to Ann Archambault from 1993 to 2011, with whom he had two children. On April 12, 2014, he married Michelle Beisner, an NFL Network and now ESPN reporter and former Bronco cheerleader. In April 2018, the couple was blessed with twin sons.

Fox Contributor Katie Pavlich Net Worth and Salary Will Leave You...

Katherine Timpf Net Worth and She Discloses Her Engagement on ‘The...