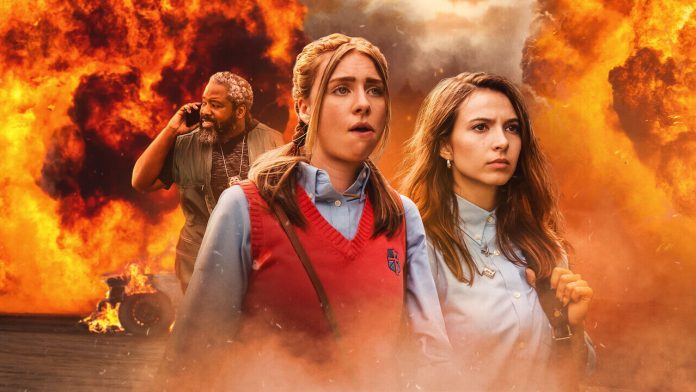 Produced by Jenji Kohan( Orange is the new black and GLOW), and created by Kathleen Jordan, TBH is a 10-episode comedy-action about twin sisters Sterling Wesley (Maddie Phillips) and Blair (Anjelica Bette Fellini). The show is about these quirky sisters who stumble into a job as part-time bounty hunters.

What is the show about? Kadeem Hardison who plays the role of a professional bounty hunter Bowser Jenkins is frantically trying to capture a ‘skip’ ( a bounty fleeing bail) when he meets the twins Sterling and Blair. They help him capture the bounty and end up as his proteges. Being involved in an exciting and dangerous profession isn’t the least of their troubles as they have to do it while attending the Willingham Academy, an over-the-top Christian private school.

Even though the show is meant to be light-hearted and poses itself as a satire, TBH delves into a myriad of social issues like class, race, social justice, and sexual identity. Simultaneously, they are also investigating their own parents, which culminates in a rather shocking twist that changes everything.

The season 1 of TBH definitely seats the stage for a new season and story.

When is Netflix releasing the second season?

The ratings of TBH has skyrocketed ever since its releases. According to a Netflix, TBH sits comfortably in third place only to lose out to insanely popular and older franchises like Legends of Korra and The Umbrella Academy.

If it were not for these two outstanding shows, TBH would have definitely been the best show of this quarter.

According to some reports, the second season of TBH was announced even before the release of the first season. But Netflix is yet to officially confirm a season renewal but given its popularity, a renewal announcement might just be around the corner.

The first season had a 14-month gap between production and release and if we can expect the same for the next season, then season 2 can be expected in late 2021.

Which cast members can we expect to see in Teenage Bounty Hunters season 2?