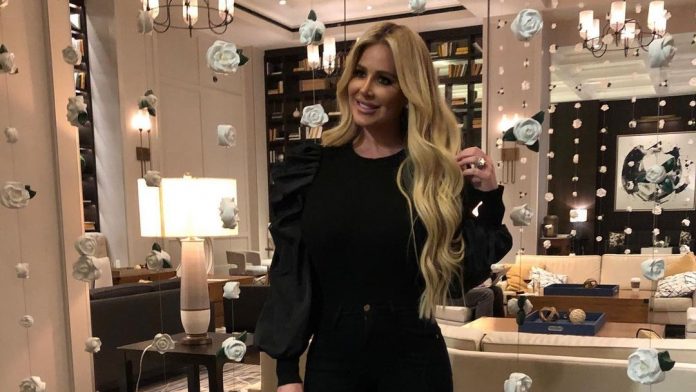 Kimberleigh Marie Zolciak-Biermann is a television personality and a singer. She was an apart of the television series, The Real Housewives of Atlanta. In the year 2012, Kim Zolciak decided to leave the show during its the fifth season and she did her own spin-off titled, Don’t Be Tardy for The Wedding and also had a second season called Don’t Be Tardy. In the year 2015, Kim Zolciak was a contestant on the 21st season of the dance competition, Dancing with the Stars.

Net Worth of Kim Zolciak is around $3 Million

Kim Zolciak was live on her Instagram profile and she was promoting Kashmere, a beauty line and she was wearing her robe. During the process, her robe slipped twice which caused her bosom to be exposed on Instagram live on two different occasions. Fans caught the slip-up and shared it to their Instagram page, further adding to the embarrassment.

Kim Zolciak and her formative years

Kim Zolciak was born on the 19th of May in the year 1978 in Pensacola Florida. She grew up in Windsor Locks in Connecticut. Her parent’s names are Joseph and Karen. She also has a brother whose name is Michael. Kim Zolciak comes of Polish and Italian descent and was raised as a Roman Catholic.

Kim Zolciak is a graduate from East Catholic High School in Manchester and she was a nursing student from the University of Connecticut. At the age of twenty-one, Kim Zolciak moved to Atlanta Georgia and she settled in Johns Creek.

Kim Zolciak and her Personal Life

In the year 2010, in May, Kim Zolciak met Kroy Biermann, a football player for the Atlanta Falcons. They met at a charity dance event and also on season three of The Real Housewives of Atlanta. The couple got married in Roswell on the 11th of November in the year 2011. The couple has four children together; Kroy Jagger “KJ”,  Kash Kade, Kaia Rose, and Kane Ren.

In the year 2013, in the month of March, Kroy Biermann filed an official request to adopt Kim Zolciak’s daughters and in the month of July, the adoption became final and the two daughters were adopted and changed their last names to Brielle Biermann and Ariana Biermann.

John Fetterman’s Net Worth and His Plans to Join the 2022...