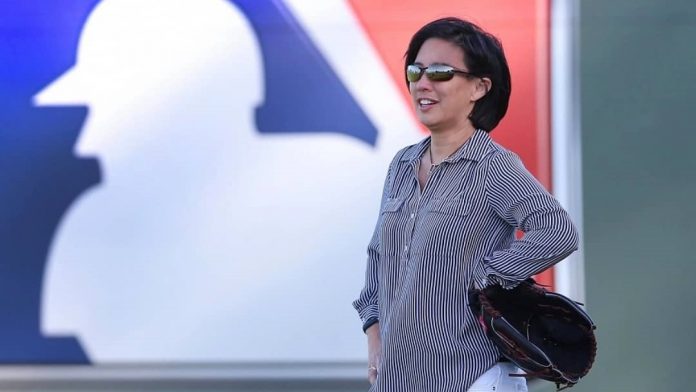 It’s 2020 and who runs the world? Girls! Women today are conquering every field be it movie business commerce, politics, or even sports. Slamming all sexist remarks Kim Ng has proved to be a baseball queen.

She is an American executive in major league baseball. Currently, she is leading the Miami Marlins as the head supervisor. This position is said to be the most relevant in the world of female baseball chief. Amidst all the struggle she has successfully made her mark and is making quite good if compared to the man of the game.

Kim Ng Net Worth is estimated at around $1.3 million

Kim has worked hard towards the future of the game and in return enjoys a satisfying fortune. Just as she accepted all the challenges like a woman, she is now accepting the loaded paycheques too. As of 2020, Kim Ng’s net worth is $1.3 million all thanks to baseball. Though the journey has just started and she is on her way to more millions.

It was a good day for Miami Marlins fans as on November 13 2020 Kim got was promoted as the new general manager of the Miami Marlins. It is a proud moment for all the baseball fans as Kim becomes the first woman to owe up to the position of General Manager of a baseball men dominated team or for starters any men’s pro sports league of North America. Thanks to 15 years of grinding which is now paying off.

“On behalf of Principal Owner Bruce Sherman and our entire ownership group, we look forward to Kim bringing a wealth of knowledge and championship-level experience to the Miami Marlins,” Derek Jeter, Marlin’s co-owner and CEO wrote in a statement.

According to sources we could put hands on Kim’s statement regarding her promotion. She said “It is the honor of my career to lead the Miami Marlins as their next general manager,” and then wrote,

“We are building for the long term in South Florida, developing a forward-thinking, collaborative, creative baseball operation made up of incredibly talented and dedicated staff who have, over the last few years, laid a great foundation for success.”

The interesting fact about this grand news is that in 2005 Kim interviewed for a GM position in Major League Baseball- an opening with the Los Angeles Dodgers. But if we look at the bigger picture it has been 93 years since the first time anyone was hired by a pro team as a general manager irrespective of gender.

Kim’s journey from taking inspiration to becoming one.

She truly is an inspiration to all the young ladies fighting hard shoulder to shoulder with all the men be it sports or even regular life.

Kim is officially ranked 13th in the list of most influential minorities in sports in 2015.

For just being 51 years (born on November 17, 1968) she had already contributed 30 years to the sport and changed its future. Ng was born in Indianapolis Indiana and was the first daughter to her parents out of the five. Soon after graduating from the University of Chicago, she started interning at Chicago white sox. Following that she became the American league’s director of waivers and records. She is not only one of the most powerful women in sports but also officially ranked 13th in the list of most influential minorities in sports in 2015.

Louie Anderson Net Worth and Was Eddie Murphy Forced to Cast...

Ginger Zee’s Net Worth, Salary, and Her Kids Updated 2021

Gervonta Davis Net Worth: The Boxer has been Challenged for a...