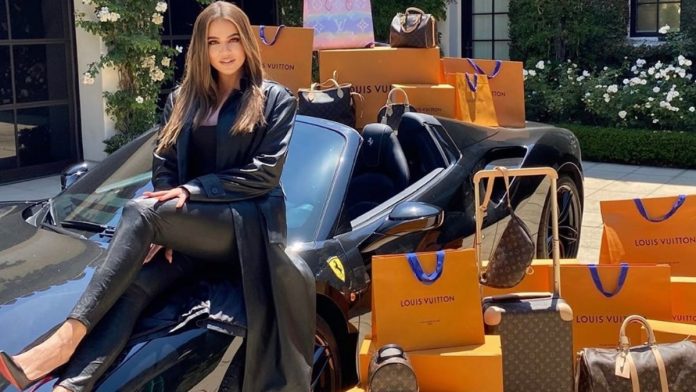 With sisters Kim and Kendall heading into billionaire status, many might be wondering where Khole Kardashian’s net worth rests in comparison. Like her business-savvy siblings, the 36-year-old Good America co-founder has plenty going for her besides her role on Keeping Up with the Kardashians, so let’s just say that she’s also doing extremely well for herself in that regard.

Khloe is mother to daughter True and owns her own clothing brand, Good American.

With the arrival of Khloe’s first child daughter True with her controversial basketball player boyfriend, Tristan Thompson, let’s take a look at how much the Keeping Up with The Kardashian Star is worth.

She was born on June 27, 1984, to Kris and Robert Kardashian in Los Angeles, California. At that time her mother was a homemaker and her father an attorney.

In 1994, Khloe’s father was thrust into a media firestorm as a lawyer on the defence team of O.J. Simpson during his murder trial, which proved difficult for the entire family.

In 2001, Kardashian suffered a traumatic brain injury in a car accident in which she went through the windscreen and suffered a severe concussion, causing long-term memory loss. At the age of 18, she lost her father Robert to Esophageal cancer, just two months after he was diagnosed.

Khloe Kardashian started her early career when the reality show ‘Keeping Up with The Kardashian’ was launched in 2007.

The show featured Khloe and her family and was a grand success and led to the subsequent spin-offs ‘Kourtney and Khloe take Miami and Khloe & Lamar’ that were a huge hit.

Kardashian and her sister have launched the D-A-S-H store chain in Miami and they also released the jewellery and clothesline called ‘Babe’ and later released another clothing line.

In 2012, Kardashian launched a commercial-free talk show called ‘The Mix Up with Khloe Kardashian Odom’. Khloe’s success on the show confirmed her as a co-host with Mario Lopez for the second season of the American version of the X-Factor.

In 2014 Khloe bought Justin Beiber’s house for $7.2 million. She bought the six-bedroom, seven-bathroom house which sits on 1.3 acres soon after her marriage to Lamar Odom ended. The home was previously owned by Eddie Murphy who bought the home for his ex-wife Nicole following their separation.

In 2016 she hosted her own talk show ‘Kocktails with Khloe’ and fitness reality show ‘Revenge Body with Khloe Kardashian’.

As of 2020, Khloe Kardashian’s net worth is roughly $50 million dollars. Khloe put the 11,000 square-foot home under extensive renovation. She floated the home for sale off-market in May 2020 for a bit under $19 million.

Today, she is an established reality star with a massive following on social media.

Michael Sorrentino Net Worth: “The Situation” with Lauren Pesce are expecting...

Marcia Fudge Net Worth as Biden nominates her as the Secretary...

Harry Hamlin Net Worth and Why the ‘RHOBH’ Couple is considered...