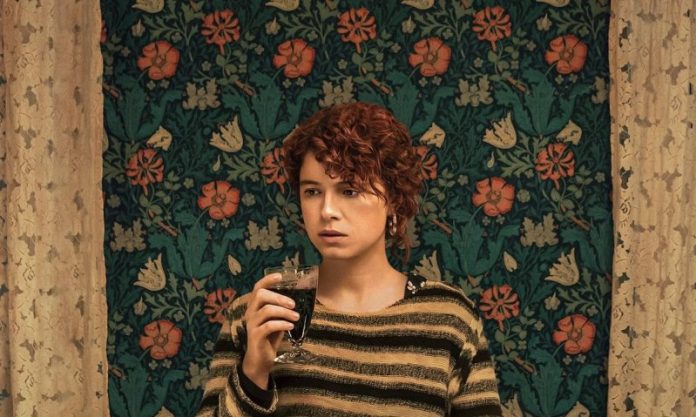 Charlie Kaufman is known for his eccentric movies. In an age where studios are busy churning out formula films, Charlie Kaufman has a reputation for making wild, meta- movies that lodge into the brains of their viewers forever.

He is widely known for scripting 1999’s “Being John Malkovich” and “Adaptation” and even winning an Academy Award for 2004’ “Eternal Sunshine of the Spotless Mind” screenplay.

I’m Thinking of Ending Things – What is it about?

Adapted from Iain Reid’s bestselling debut novel of the same name, the movie can be described as a dark, psychological thriller steeped in horror. Kaufman does a great job as he rebuilds the novel for the screens into something unique and horrifying, resulting in one of the best mind-bending movies you have seen so far.

The movie follows Young Woman (Jessie Buckley) who embarks on a road trip with her boyfriend Jake (Jesse Plemons), to his family farm. Even though she is considering breaking up with her boyfriend, she agrees to meet his parents. Unfortunately, a snowstorm traps all of them in the house and with nowhere to go, things begin to unravel quickly and in the most bizarre way possible. The drama adds to the mystery of this film and its characters thanks to strange behavior from Jake’s mother (Toni Collette) and father (David Thewlis).

Written and directed by Kaufman, I’m Thinking of Ending Things is a slow-paced movie that quietly unravels its characters and their motivations in a not so linear fashion. Young Woman acts as our central character and the audience’s proxy to this puzzle. Her inner dialogues help shape the narrative and flesh out the characters before us.

However, it would be unfair to the character if we say that the movie is wholly about Young Woman. It delivers something more deep and profound, as is evident from Kaufman’s previous works. Borrowing a page from the “Eternal Sunshine of the Spotless MInds”, this movie is crafted around a guiding metaphor which is made clear to us by Kaufman’s visual codes buried within the layers of the film.

Running at a length of just over two hours, and an abstract approach to its story, this movie might not be for everyone. Fans of the novel might find some elements missing but as far as the story is concerned, it remains the same.

For those who are familiar with Kaufman and his diversity of work, this movie will likely devastate you. It draws you into its dreary world of heartbreak and longing and pushes its audience to feel something very specific.

If you have run out of shows, or are wondering what to watch next; I’m Thinking of Ending Things is a perfect movie to sit back and enjoy

Katherine Langford opens up about why ‘Hannah Baker’ was not on...

Outlander Season 6 is back with “Sam Heughan” and Rest of...