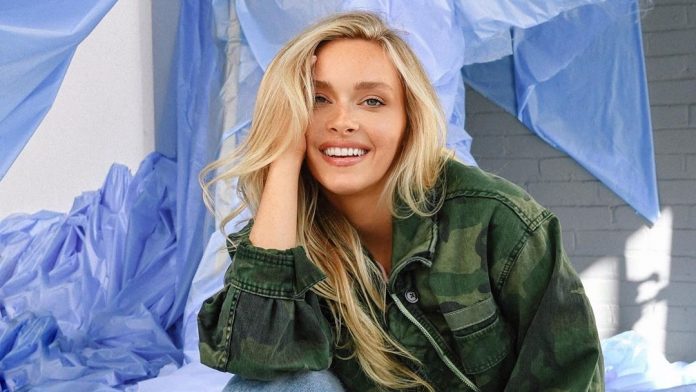 Model and actress, Camille Kostek and her boyfriend Rob Gron who is a former American football tight end appeared on the SiriusXM radio show where the host, Jenny McCarthy asked the couple some personal questions.

The host asked the couple who have been together since 2015 whether they used to hook up before the games or was that a bad omen.

The former cheerleader of New England Patriots told, “The night before games he would have curfew and so he didn’t get to sleep there”.

She added, “But I would kiss you goodbye”.

The three-time Super Bowl champion shared, “You know, sometimes we did and sometimes no”.

When asked whether hooking up or sleeping together before the game affect the game at all, Rob Gron said, “No, I don’t think so, I don’t”.

The current WWE 24/7 heartily agreed with his girlfriend.

The player who played his entire professional football career for the New England Patriots and NFL announced his retirement in March 2019.

Now, he is a football analyst for Fox Sports and an occasional wrestler in WWE.

Camille Kostek was accepted to the New England Patriot Cheerleaders roster in 2013 while she was a junior. Her last game was in 2015. After this, she started hosting and modeling.

She did multiple television commercials for various brands and was on the cover of many magazines. In 2019, she was in Maxim’s Hot 100 list of Sexiest Women in the World. She gained recognition and fame after her appearances in the Sports Illustrated Swimsuit Issue.

She became internationally known after landing a solo cover with the magazine.