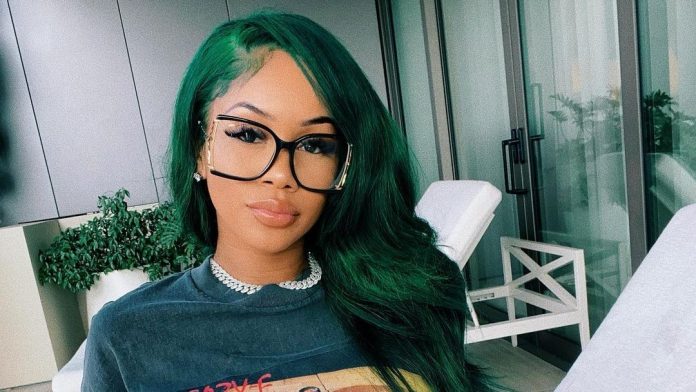 Diamonté Quiava Valentin Harper who is more famously known as Saweetie has definitely turned out to be one of the most savage female rappers in the game.

Although she was born and raised in California, Saweetie hails from a family of diverse backgrounds. Saweetie grew up with a Filipino-Chinese mother and an Africa-American father.

In an interview with HelloGiggles Saweetie spoke about how it was to be raised in a family of different backgrounds and what it was like growing up Biracial, she said:

”I definitely felt out of place at times because the cultures that I was raised around were completely night and day. But I feel like those type of internal struggles help me understand people better, and I now know that not one set of people is the same. Like, my mom is of Filipino descent and my dad is of Black descent, so it allows me to be sensitive to other people’s cultures. Because sometimes people might not communicate or understand the things that I do. I might not understand what someone else is doing, but I’m always able to know that people come from different places and have different understandings.”

A Look Into Saweetie’s Career

Yet another incredible rapper from SoundCloud, Saweetie rose to fame in 2017 after she released a freestyle, ‘High Maintenance‘. In 2018 she began working for Rihanna’s Fenty Beauty and in the same month signed to Warner Records.

In 2019 she released her second EP’s Single, ‘My Type’ that peaked to number 21 on the Billboard hot 100 charts. She also appeared on nick cannon’s MTV hit show Wild ‘N’ Out

Saweetie released the single from her debut album,” Pretty bitch Music’ on the 20th of June and featured in Tay Money’s Bussin 2.0 and Ava Max’s ‘Kings & Queens”

Currently, the Biracial star is said to have a happy relationship with superstar rapper, ‘Quavo’ who is also set to release an album this year.

Hillary Scott Net Worth and Lady-A Reveals Real Reason for the...

Tori Kelly Net Worth: The Singer Talks About ‘The Masked Singer’...

Kelly Clarkson Net Worth and The Richest American Idol Winner?