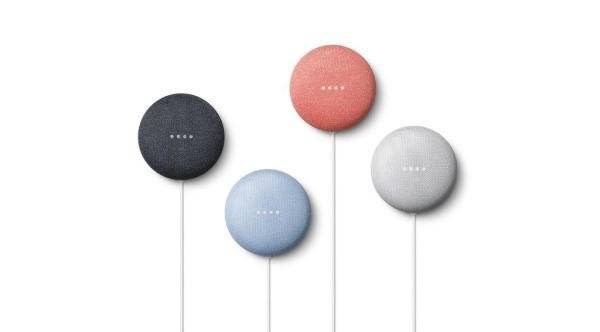 This October Google is not only launching the Pixel 4 and Pixel 4 XL but also the 2nd generation virtual assistants just like its Google home. The second gen assistant device is named Google Nest Mini.
But WinFuture this morning leaked the official Nest Mini renders. If you look at both the first gen and second gen Google’s assistant devices you would find negligible difference. The difference being that before the color underside was different but now the whole speaker has the same color. Before with Home Mini you could find 3 out of 4 such devices to have the identical orange underside.
The new Google’s Nest Mini has been released with a groove at the underside to make wall mounting easier which was missing in it’s previous gen device. You can also find the grooves having an accent color with the gray Nest Mini’s being orange while the black one is white. It comes with a 1.5 m cable ( approximately 5 feet) included in the package. As from the picture of it’s new Nest Mini it is evident that Google has moved on from micro-USB cables as a power connector. While the actual port is not visible but the plug inserted into the device is clearly round and could be similar to that of the Nest Hub and Nest Hub Max. With the leak WinFuture also stated that the Nest Mini would use 15 watt power supply instead of the traditional 9 watts.
The Google Nest Mini would be released in four color variants namely, anthracite( charcoal), rock candy(chalk), Coral and Sky Blue. The Google Home Mini had already been released in anthracite and chalk color with Coral and Sky Blue being the new addition to it.
Talking about specifications Bluetooth has been upgraded to version 5.0( from it’s previous model having 4.1) while 802.11 b/g/n/ac Wi-Fi is present. From today’s images no physical reset button is available. Also it features Chromecast Support and housing made of recycled materials. For example the top part is made of plastic obtained from shredded plastic bottles, while the lower part is constituted of at least 35% recycled plastic.
Other aspects of the Nest Mini remains same as that of it’s previous model which include the four embedded indicator lights and the microphone mute switch. The new Nest Mini is supposed to cost around $60/€60 as it’s predecessor.

Why did Loren Gray and Ian Jeffrey part ways? Or are...

Tesla is on fire once again: Hits a tow truck in...