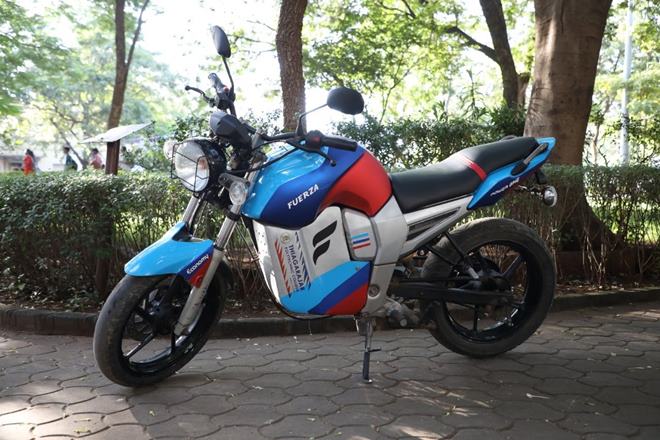 It’s 2020 and technology is making new highs. India being an expanding country have never let any developmental opportunity go untouched. The Indian automotive industry has finally laid hands in the all-electrical mobility genre and the country’s reputed brands are backing it up. The in-trend switch from our regular commute to EV has attracted many riders. The ones most fascinated by this plan are the college-going students, engineers to be precise.

A team of six final-year engineering college students of Thiagarajar Polytechnic College, Salem in Tamil Nadu made an electric bike using a scrapped Yamaha FZ. It is like an engineer’s best out of waste. The bike is not only for fun but can give you a nice ride, the electric bike can cover a maximum of 80 km on a single full charge while the top speed is pegged at 40 kmph as of now. They named it ‘Fuerza’ which defines strength.

As we talk about the bike more and more it becomes more interesting. The bike can be charged through a regular home socket because of its lithium-ion battery. A 15 amp input would charge the bike in almost 3.5 hours, while if the input is less than that it would take a minimum of 4 hours. The six young brains are onto making a solution that would convert any regular fuel-driven bike to an electric one. The team also plans to offer multiple solutions in the future depending on customer requirements like better speed, range, and more. And charging of the bike is not at all an issue, the electricity went to charge it won’t cost you more than 20rs.

Now, coming to Fuerza’s price criterion, it’s over the top but worth it. The procedure was like, the students first purchased the ditched Yamaha in Rs 10,000, along with their intelligence it cost them around 98,000 (including the purchase cost) to build the masterpiece, which eventually will cost max 70,000 if produced in mass quantity. So the bike took a lot of effort and baggage of cash.

The Fuerza electric bike was showcased at India’s first new Clean and Intelligent Mobility Mission Festival 2019-2020 that was organized under All India Council for Technical Education (AICTE). The said project was awarded the first prize with a cash reward of Rs 50,000.

These six youngsters will soon after the lockdown will get good investors for their over the top e-bike project and two of them already got jobs. The bike’s prototype would be shown to various bikes manufactured from across the country so more ’Fuerzas’ are made.

Electric Scooter Caught Fire: Dropbox Had to Evacuate its Headquarters