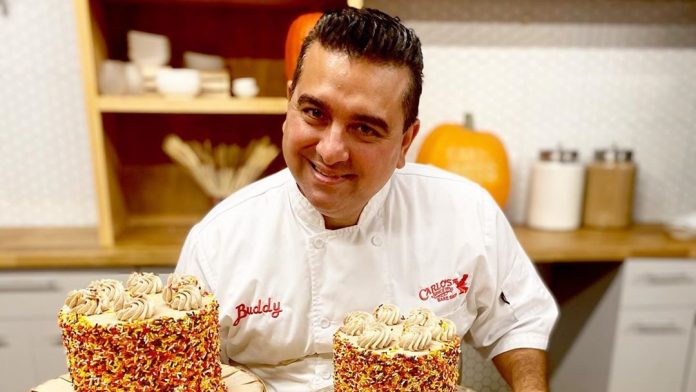 “If baking is any labor at all, it’s a labor of love”, said the American Author Regina Brett about baking. Now, if someone is as a good baker as a great television personality, it’s literally a cherry on the top (pun intended).

That’s Buddy Valastro for you. This man has his love for baking since he was a kid, and what’s more, he is an equally talented television star.

Having a family business as his father’s bakery, many famous bakery television series, and owning a company definitely helped Buddy Valastro to make fortune and give the best to his family and make his father proud. Buddy Valastro now has a net worth of 10 million dollars.

Buddy Valastro’s real name is Bartolo. He was born on 3rd March 1977 in New Jersey, United States. He belongs to Italian and American ancestry. Mary Valastro and Buddy Sr. Valastro are his parents. His mother was had migrated when she was just 6 years old. He has four sisters Grace Faugno, Maddalena Castano, Mary Sciarrone, and Lisa Gonzalez.

The heartfelt career of Buddy Valastro

Buddy Valastro, started baking from a very young age and used to work with his father at their bakery ‘Carlo’s Bakery’. His parents took him to the bakery because he was a troublemaker and they wanted to keep an eye on him.  At the age of 11 years, his father passed away and he dropped out of high school and shouldered all the bakery’s responsibility and started working as a head baker. He took over the bakery at the age of 17.

Surprisingly, the first dish he mastered was cream puffs, and not a cake!

He worked hard to make his father’s dream come true and started making designer and stylish wedding cakes which grabbed the eyeballs of plenty of cake lovers and attracted many couples. Several magazines featured Buddy Valastro’s wedding cakes on their cover magazine and his father’s bakery as best of the household bakery.

Carlo’s bakery has been run by his family. Buddy has such a great professional attitude towards his job, that he fired his own sister from the job. He also baked the most expensive cake in the world for Socialite Devorah Rose, costing about $30 Million.

The golden ticket to reality shows

He got the chance to explore beauty of food more when he got life-changing call in 2007, to be on ‘Food Network Challenge.’ Then Buddy Valastro launched by far the most famous show related to food, ‘Cake Boss.’ This show was run by himself along with his mother and his siblings got the highest TRP making the show a major hit on the television. After the massive success of his famous show Cake Boss, he opened up 17 more bakeries.

In 2014, with his reality shows going on, he launched his independent catering company called ‘Buddy V’s Event.’ He was also in the shows like Buddy’s Bakery Rescue, Kitchen Boss, and The Next Great Baker and made a guest appearance in the film Bridesmaids. Very recently, he declared that there would be ‘Buddy vs. Duff’ Season 2.

He got married to Lisa Valastro in 2001 and has four kids Sofia, Buddy Jr, Marco, and the youngest one, Carlo. Recently, Buddy underwent a third surgery to fix his hand which got injured due to getting stuck in the pinsetter at a bowling alley. Unfortunately, he isn’t too sure if he can still bake after the fatal incident.

Buddy is very religious and is out and out a catholic person and believes in giving back to the community which has given him stardom.

Lisa Barlow’s Net Worth, While the RHOSLC Star Verifies She...

Tyrese Gibson Net Worth as he Gets Split from Wife Samantha

Drake Net Worth: One Of The Richest Rappers In The World!