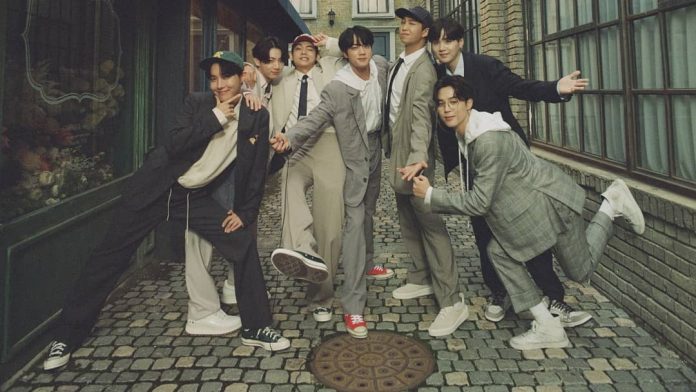 The name BTS stands for the Korean expression Bangtan Sonyeondan which means Bulletproof Boy Scouts and according to the member J-Hope, the name was chosen to signify the motive to block out all the criticisms and stereotypes that adolescents face during their lives.

BTS is a boy band from South Korea that has seven members, RM, Jin Suga J-Hope, Jimin, V and Jungkook. The band came together in the year 2010 and they made their debut in the music industry in the year 2013.

BTS Net Worth is around $450 Million

For the year 2020, BTS have an estimated net worth close to $450 Million. However, their salaries for this year are still under review.

Having such massive net worth, they also have a list of brand endorsements ranging from Baskin Robbins to New Era Korean Clothing Stores. They also endorse STONEHENge, a famous jewellery brand in South Korea, Starbucks, Skechers, Fila amongst others.

BTS breaks record with the release of New Album

BTS took the internet by storm when they dropped their new album, ‘BE’. Along with the album they also released a music video for the song ‘Life Goes On’. The album went on to become the fastest selling album in the history of the Hanteo charts and made a record breaking one million sales in just thirty minutes of the album’s release.

The song Life goes on is already on the number one spot on the I-Tunes chart and it achieved this within one hour of the song’s release. Their other songs from the album like ‘stay’, ‘telepathy’, ‘skit’, ‘fly to my room’ also charted on the top ten list and according to sources out of the ten spots on the charts, seven of them are from the new BTS album.

BTS entry into the world of Music

In the year 2017, the boyband made a statement saying that their band name would also stand fort Beyond the scene in order to promote their new brand identity. They said that their name was extended in order to tell the world about “growing youth BTS who is going beyond the realities they are facing, and going forward.”

The band writes and produces their songs on their own and their styles are spread across a varied range of genres including hip-hop, R& B and electronic dance music. Their videos normally put out a storyline of alternative Universes and they have been a band that have been extremely social with their fans otherwise known as the BTS Army. They touch on topics like mental health, troubles one goes through during their school days and also tells people how important it is for one to love themselves. They debuted with their album 2Cool 4Skool.

They were the first K-pop group that received a certificate from the Recording Industry Association of America for their hit single Mic Drop. They have a large list of awards to their name including four Billboard Music Awards, 6 MTV Video Music Awards and 4 American Music Awards.

Alexander Gilkes Net Worth and His Engagement To Maria Sharapova

Fox Host Jesse Watters Net Worth and How Much is His...