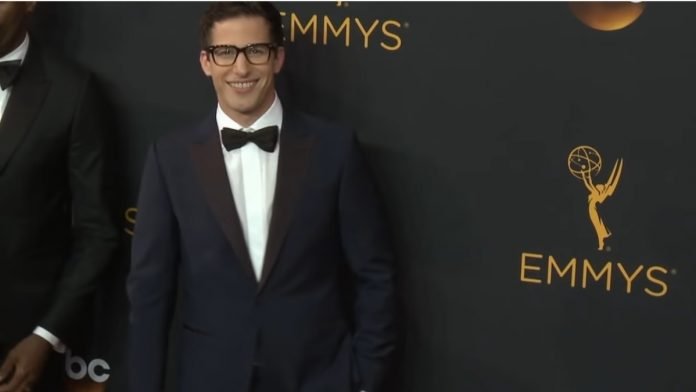 Andy Samberg has been on the top ten comedians list ever since he starred in immensely popular cop-comedy show Brooklyn 99. The premise of the show is perfect for Andy, as it showcases his naturally goofy and fun-loving side. The same can be said about Cristin Milioti who garnered huge praise for her performance in How I met your mother. Even though HIMYM was on a downward spiral when she arrived, Cristin Milioti is the sort of person that could charm the socks off of anyone, and that she did!

So imagine the kind of goofy conversational banter and quirky scenarios these two would get into if they worked together. Well, it is exactly what we get in the romantic time-loop comedy, Palm Springs.

The movie directed by Max Barbakow, and co-produced by Akiva Schaffer and Jorma Taccone was reported as a breakout hit at the Sundance Film Festival that is available on Hulu. Palm Springs, which features the debut of director Max Barbakow, says “Its DNA is not simple — it kind of meanders and touches a lot of different genre elements. We were so lucky to find partners who saw what was special about it and went into it for the same reasons we did.”

There have been many time-loop films before, like Groundhog Day, Edge of Tomorrow, etc., where the hero relives the same day over and over again without any significant consequence. Palm springs follow a similar narrative but manage to keep things fresh when Niles (Andy Samberg) accidentally gets Sarah, played by Cristin Milioti in this cosmic anomaly with him. Not only do they have to relive the same day when they die, but they also have to do so every time they go to sleep!

As we follow their characters fumbling about in this delicious fantasy, we realize that beyond all the sci-fi shenanigans, the movie is truly a love story. There are quite a few twists to keep the audience on its toes during its entire length of 90 minutes. Even though this might be considered a bit short, the climax of the movie was more than fulfilling according to the majority of the viewers.

Even though the movie released in July 2020, Andy Samberg and his co-star Milioti quickly reminded us of this blockbuster as they caught up on an Instagram Live session where they spoke about their onscreen collaboration and upcoming projects.

Andy was also kind enough to share his skincare routine — something I’m sure his fans are looking forward to.  We even had a glimpse of Andy channelling his inner Jake Peralta, as he struggled to switch his live-streaming off while Cristin Milioti struggled to contain her laughter and her embarrassment. This only goes to show their friendship and the chemistry they share with each other. Yet, another reason for people to watch their movie.

Harry Hamlin Net Worth and Why the ‘RHOBH’ Couple is considered...

Julian Assange Net Worth and Is His Fight for Freedom Completed?