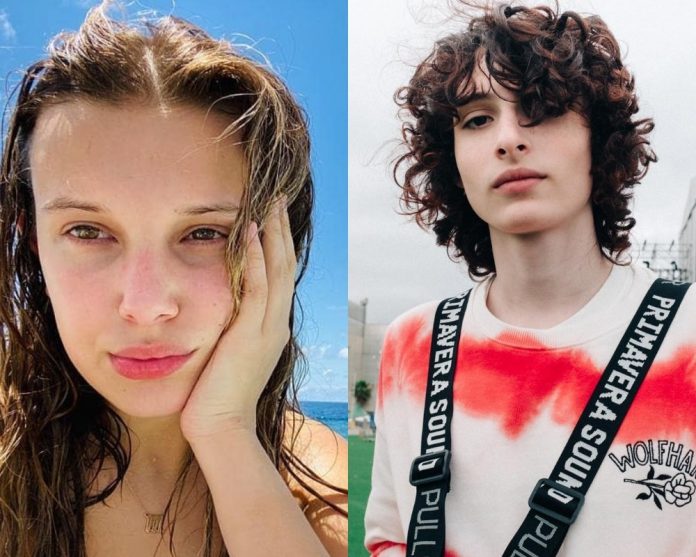 Stranger Things co-star Noah Schnapp tagged Brown and Wolfhard in an Instagram meme that caught everyone’s attention especially those that follow the series. The meme read, “Tag two people that want to hook-up with each other to make things awkward”. Well, Noah didn’t only make things awkward, he also made it viral. In the comments of the post, he tagged both Millie Brown and Finn Wolfhard, which raised a lot of eyebrows. His comment has gotten 15470 likes and 1371 replies as of now. Fans got a moment of happiness and expressed through the replies how much they adore and ship Millie and Finn as a couple.

Millie and Finn play love interests in the series Stranger Things and they have electrifying on-screen chemistry. Fans ship them as a real-life couple too and took Noah’s little mischief as a hint that the reel couple is also dating in real life.

But life’s not fair and we don’t get everything we want no matter how hard we ship for it. Rumour has it that Millie Brown may actually be dating a 17-year-old Rugby player, Joseph Robinson. This speculation emerged when Joseph shared her picture on his Snapchat. These two have also been spending a lot of time together lately and have been spotted together several times. The slam dunk is that in November, Millie joined Joseph and his family for a holiday in the Maldives. We may not know anything else for sure but we know this that if the family is involved, there is something to dig.

Millie has also dated 17-year-old singer Jacob Sartorius in 2018 but the relationship lasted only a few months.

On the other hand, Finn has been very successful in keeping his personal and profess